Just Be One of Us, Mr President 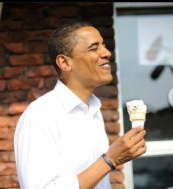 OK, I think I finally figured this all out. What triggered my epiphany was watching the latest YouTube video of our Commander in Chief pandering to his hand-picked TV crowd and recounting that Capitalism over the last several decades just doesn’t work. He goes on to say that although we all hold dear our values of competition and free market trade that system just hasn’t paid off. Really? Well, the facts don’t bear out the statement.When individuals make statements that are not factual, but they are only speaking their mind, then they may be simply ill-informed. But if they know the truth but choose to tell a lie which supports something else, then they want us to do something. Hmmm,….. we know the big Chief doesn’t appear anywhere without a teleprompter which means he is reading something that someone else prepared and edited for him. So that person surely knows the following facts about capitalism in the US:


You get the point. So, what’s up with our president deliberately telling an untruth?

_ Well, like I said, I think the light for me has finally, slowly, (like a CFL lightbulb), dimly come on. Yep, hate to admit it, but he’s a socialist. His plan is to not fix anything. His plan is for the economy to continue to struggle and unemployment to remain high. That creates millions of people who will need to agree that the system doesn’t work, because it sure ain’t working for them! He doesn’t want unemployment to go down.

Enter the OWS folks. These spontaneous demonstrations conveniently illustrate a “huge movement across the land.” This Administration has virtually killed off numerous job creators like the South Carolina Boeing factory, the Trans Canadian-American pipeline, Oil drilling in the Gulf and a tax policy which absolutely keeps business in this country from investing in growth for fear of huge taxes. The more unhappy Americans get, the more willing they are to listen to his socialist agenda.

In the 1930’s we had a similar problem due to the Great Depression. Suddenly Communism, Socialism and all kinds of alternatives began to spring up declaring Capitalism had failed. “Power to the workers”. “ Nationalize everything”. “Redistribute wealth.” It didn’t happen, know why? Because Americans didn’t want it. But here is an important difference since the ‘30’s, we didn’t have our President back then trying to push it on us.

That’s quite a different thing. You know what the greatest thing about Americans is? Real Americans pull together for each other when the chips get really down. When I say real Americans, I’m talking about the sandlot baseball playing, take your girlfriend to the drive in Saturday night, Friday night football game going, prom night, mow the front yard, paper route, Trick or Treat, Thanksgiving and Christmas present Americans. Can you find any of these qualities in our current president? I just can’t get my arms around it but I don’t think he grew up with any of this. We all did. Where are all his high school friends? Hers? Drinkin’ buddies? Ex girlfriends? My God, anything that makes him look like us. I mean it seems like this guy was manufactured somewhere and wound up and sent our way. I just can’t relate to him as an American. American values. “Truth Justice and the American way”.

So Capitalism doesn’t work Mr. President? Really? How would you know? Now we get it. You are trying to make things so bad that we will get upset enough at the Government to throw them out right? Oh, but not you. It’s Congress, right? Yeah those guys are blocking my jobs bill. They want to cut off your Medicare. They want to kill grandma. Let’s just suspend Congress while we are at it. Right? Wrong!


Here’s the thing about American and Americans. That will never happen. I don’t know what textbook or socialist cell you read about America in, but you missed it. Your entitlement nation with you at the top cannot ever happen here. We just won’t put up with it no matter how bad it gets. That’s what you don’t understand. I only wish you could take a step back from your training and the socialist creed you were indoctrinated with and see what a great country this is. How fortunate that you made it to be president, but you are blowing it, man. You know, President Obama, the thing about we Americans is this – after all you have tried to do to us, we would still welcome you back. But put away this ridiculous plan and just be one of us.
Share this today!